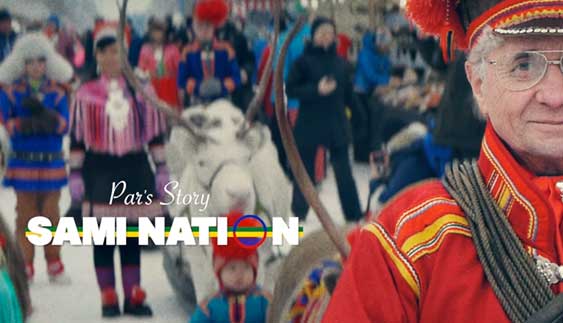 Follows stories of indigenous people with their own culture, customs and language that differs from the society that surrounds them.

Within the Nordic region lies a land that extends beyond four countries. A rich wilderness inhabited by a people who have always been there. An indigenous people who have their own culture and customs, their own language and lifestyle that differs from the societies around them.

The Sami were originally nomads, living in tents during the summer and more sturdy peat huts during the colder seasons. Today, The Sami live in modern housing and only use tents as very temporary accommodations during reindeer migrations if they don’t already own cottages in the mountains and forests. Most Sami live in the north but there are Sami all over Sweden. Today, only ten per cent of Swedish Sami earn a living from the reindeer industry, and many combine their family businesses with tourism, fishing, crafts and other trades.

They now live in an age of great change in which their culture and ways of life are adapting, finding new, varied and modern expressions. They are craftsmen and artists. They are reindeer herders, hunters.

They are still a nation.

PRESERVING INDIGENOUS CULTURE IN THE ARCTIC

Sami country – known as Sápmi – stretches across the northern part of Scandinavia and Russia’s Kola Peninsula. The Sami have been recognised by the United Nations as an indigenous people, giving them the right to preserve and develop their crafts, language, education, reindeer husbandry, traditions and identity. There is no census for the Sami, but the population is estimated at around 80,000 people, spread over four countries with approximately 20,000 in Sweden, 50,000 in Norway, 8,000 in Finland and 2,000 in Russia.

The Sami reindeer industry has specific seasons for calving, marking, counting, castrating and slaughtering. Changes in grazing rights and logging territories have historically been a dispute between reindeer herders and landowners in Sweden. In 2011, the Supreme Court ruled in favour of the Sami, giving them common law rights to a specific area of land – possibly the most important modern verdict regarding Sami issues of law.

Much of today’s reindeer industry is meat production. In the past, during the migration of entire reindeer herds, the herders and their families would move by foot or on skis. Nowadays, reindeer herders use snow scooters and all-terrain vehicles to drive the herds. In rare cases trucks are needed to transport the reindeer to new grazing grounds.